Perrhe is located 3 kilometers north of the city centre. In ancient sources it was named Me’arath Gazze Pörön, and Pirin and Perin in Mesopotamia. Perrhe was a major city during the Kingdom of Commagene (163 BCE - 72 CE) and became an important asset for them because it is located on a route between another local capital, Samsat (Samosata), and Malatya.

The ancient city of Perrhe was a place where armies, caravans and soldiers could take a break. The water flowing from the fountain still provides drinking water for residents today. The importance of Perrhe endured throughout the Roman Period due to its ancient roads over the Taurus. 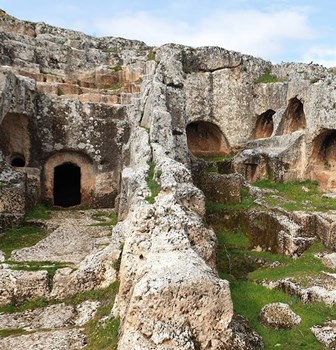 In 325 BCE, a delegation led by Bishop Ioannes Perdos attended the Biblical assembly that convened in İznik. A letter from Andreas (Elexandar) of Samosata to Alexander the Great reporting about some important bishops in Perrhe in 433 CE, shows that there was also religious importance. All of these show that Ancient City Perrhe (Perre Antik Kenti) was a city of religious and geopolitical importance during Antiquity.

The thousands of tomb chambers and galleries in the Necropolis area of the Ancient City, which is only partially excavated, fascinate visitors. The state workshops are olive oil manufacturers located next to the necropolis were.