Located on the southwestern end of the Xanthos Valley, 40 km west of Kaş and 200 km from Antalya city center, Patara Ancient City (Patara Antik Kenti) is one of the most important cities in Lycia.

Patara Ancient City has been excavated since 1988 and is one of great importance not only for its archaeological values, but also because it's an ancient beach where caretta-caretta turtles have laid their eggs for millions of years. 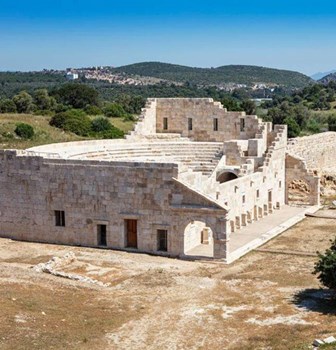 Ancient texts dating back to the 13th century BCE mention Patara as a trade center. The Tepecik Acropolis, which dates from the Middle Bronze Age, has many ceramic pieces with features of that period. Stone axes dating from before 1000 BCE found on the slopes of Tepecik indicate just how long Patara's history is.

Patara, which became even more important during the Byzantine Period, has been an important center for Christians. Saint Nicholas - Santa Claus - was born in Patara. It continued to be an important town throughout the Middle Ages and is still known as a prominent location to this day since Turks coming from Anatolia settled there permanently.

The Roman Victory Gate, dated at end of the 1st century AD, is one of the Patara Ancient City's impressive ruins.

The Temple of Athena is among the other remains on top of the hill. The theatre, basilica, and temple can also be seen near there.

Parliamentary Building: Patara was one of the Lycian Union's six cities that held three votes and might have been its most important member. The Lycian Union (Lycia) as a confederation of 12 cities, one of which was Patara. Recently excavations have uncovered the remains of what may be the world's oldest known parliament. Estimated to date back in around 3200 BC and belong to the Lycians, this could make it eligible for "the earliest known established democracy."

Lighthouse: There was also found a 2000-year-old lighthouse at the ancient Roman port of Patara, discovering probably the oldest such structure that has managed to remain intact. According to archaeologists in the excavation area, the 12 m high lighthouse was built under imperial reign of Emperor Nero who ruled from 54 to 68.

The ancient city of Patara, which was included on the UNESCO tentative list in 2009, is one of the valuable universal archaeological sites in Turkey.