The ancient city of Olympos is located on the coast near Cirali and 70 kilometers from Antalya on the southern slopes of Tahtali Mountain.

The city was a member of the Lycian League, although it is unknown when it became a member. It began producing League coins in the second century BC, perhaps around 130 BC. Olympus was one of the League's six greatest cities at this time, with three votes. 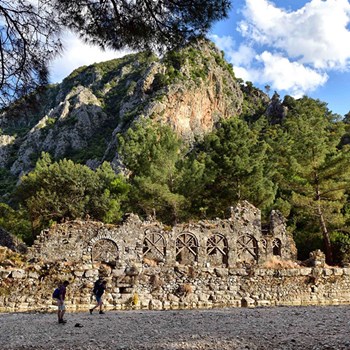 There are a number of Roman and Byzantine ruins in Olympos' ancient city that you may visit. There are several springs spread throughout the area, each with lukewarm, drinkable water. The land has been covered with a variety of herbs as a result of these waters. However, because of the overgrown vegetation surrounding it, this ancient city may be missed. In addition to historic remnants, Olympos Ancient City should also be appreciated for its great diversity of plant life.

The temple gate, theatre, southern and northern necropolis, necropolis church, entrance complex, alcestis sarcophagus, monumental graves in the harbor area, harbor basilica, southern slope settlement containing a bathhouse with mosaic floors and the agora that have survived to this day are worth seeing. From ancient times onward, the city walls and towers in the bay have been preserved.

Temple Gate: The gate of the temple, which is situated on the south of the Akcay River, is the most intriguing structure.

Olympos Theatre: The theater, which is located in the southern city and has a capacity of around 5000 people, was constructed on the northern slope of the hill.

Olympos was made a bishopric of the metropolitan see of Myra, the capital of the Roman province of Lycia. Saint Methodius was Olympos' first recorded bishop, serving from about AD 300 to his martyrdom in about AD 311. Aristocritus attended both the Council of Ephesus (431) and the Council of Chalcedon (451). Anatolius signed the joint letter that the Lycian bishops sent to Byzantine Emperor Leo I the Thracian in 458 regarding the murder of Proterius of Alexandria. Ioannes took part in a synod convened by Patriarch Menas of Constantinople in 536. The Metropolis of Myra had 36 cities and bishops under it including Olympus.