Noah’s ArkPlaces to Visit in Agri

The Noah’s Ark is believed to be stranded at a location 3.5 km away from the Turkish-Iranian transit road, about south of Ağrı Mountain, between Telçeker Village and Mesar Village. Ağrı Mountain is the place where Noah’s Ark rested after the flood, according to religious texts. The areas called Noah’s Lost City and Trail o f Noah’s Ark may be locations of this sacred narrative. 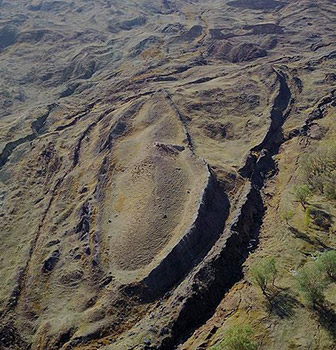 The idea of the Ark coming to a stop on a mountain has been around for centuries. The first mention was in 1876, when some Armenian priests from Iran told people visiting Ağrı that the Ark had landed here and they could see it by looking at Akdamar Island. More recently, in 1979, an Iranian visitor who saw similarities between Azerbaijan’s Shamkhor Valley and ancient Tabriz suggested there might be something about this story worth investigating. But nobody found anything until 1987 – a geologist working with natural gas exploration crews noticed scattered stones high up on one side of a valley called Turkmenbashy Mountains. The geologist reported his findings to a Turkish archaeologist from the local archaeological museum and then they both visited the site together.

Turkey has since found more than 100 pieces of petrified wood in different locations on Mt. Ararat’s slopes that are believed to be part of Noah's Ark! But according to archaeologists, these discoveries do not prove beyond doubt that this is where the ark finally came to rest. For example, there could have been other places along its route with similar geological features such as Turkmenbashy Mountain or Mount Suleiman about 20 kilometers away in Iran which also contain evidence for ancient forests. Some people believe that Noah's Ark landed elsewhere near Mount Suleiman or Turkmenbashy Mountain which both contain ancient forests in their slopes like Mount Ararat does; these theories are based only on circumstantial evidence such as other mountains containing forests or rocks believed to be petrified wood from the ark. But the most popular theory is that Noah's Ark landed on Mount Ararat. The research team concludes in their report that "the evidence collected so far suggests a connection with Noah’s ark." The final destination of the ark has not yet been confirmed, and historians and archaeologists will keep searching for more conclusive proof as to where it came to rest.