Mount AraratPlaces to Visit in Agri

Mount Ararat is the highest point in Turkey with an elevation that ranges from about three thousand feet high on the north and east sides up to about six thousand feet high south and west. The mountain range spans almost 25 miles wide by 40 km long and is covered with more than four inches of ice every year during winter months. It can be seen well enough from various vantage points throughout eastern Turkey but should you want to spot Mount Ararat's slope from afar it also has a low pass separating it from another volcanic ridge extending down towards Eastern Taurus Ranges. There are two peaks in this mountain. The one that is easy to spot from afar with a snow-covered summit, some 16,800 feet (5165 meters) above sea level. 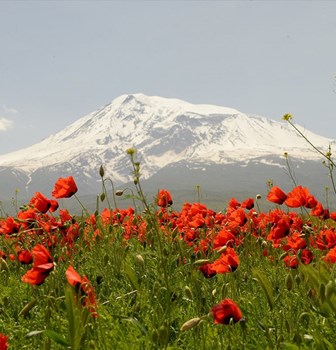 The other peak in Mount Ararat has an elevation of only about 12,782 feet (3,896 metres) high but it's not covered by ice and so can't be seen nearly as well from the ground. It also makes up just over half of the mountain range's circumference while its higher counterpart covers more than 75 % of Mount Ararat territory; which might explain why this second peak is rarely mentioned in hikers' guides or tourist books covering Turkey.

The two peaks are separated by almost four miles wide making them sometimes difficult to see together at once without binoculars or a telescope on clear days. The city of Agri is very famous with this mountain. There was formerly a village on the slopes of the Ararat high above the Aras plain, at the spot where, according to local tradition, Noah built an altar and planted his first vineyard.