Misis Ancient City and BridgePlaces to Visit in Adana

Misis Ancient City is located on the outskirts of the Çukurova Basin and, as one would expect for a settlement to last 7000 years, bears traces of many varying periods. There are evidence of an ancient settlement in Misis dating back 6000 BC; this makes it a very important part of Çukurova's regional history.

The city is said to have been founded by one of Troy's heroes, Mophos. After a war-stricken Greece, he moved to this area and restored what was left—Miopsusestia Ancient City (a name that changed over time) for him alone. It would be known as Misis--literally meaning "land or homeland of Mopsos." 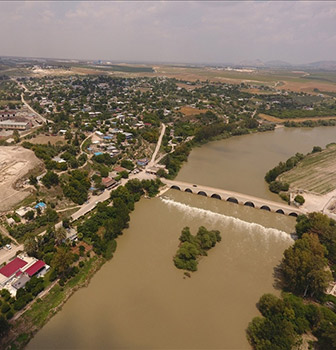 The city was captured by many civilizations, including the Assyrians, Macedonians and Seleucids, and became an important center during Roman and Byzantine times. Abbasid reconstruction in the 8th century AD improved the city as trade routes became more active again. Although it fell into Seljuk's reign in 1082 AD, the city changed hands several times throughout history with rule alternating between Antakya, Byzantium and Cilicia before finally becoming a domain of Armenia under Armenian control at the end of 12th century A.D.

The ancient city of Misis was captured with the Mamlukes in the 14th century and became where tribes living here today settled. The city, ruled by the Zamanaoğlu Principality for a long time came under Ottoman Empire rule after 1516 until 1602.

The remains that have survived in Misis, the ancient city ruled by the Ramazanoğulları , are the mosaic floors of a basilica of the 4th century AD , a nine-arched stone bridge, the walls in the acropolis , aqueducts and bath ruins, the Havraniye Caravanserai from the Seljuk and Ottoman periods, and a single-domed mosque.

The Misis Bridge was built on one of the most active trade roads to the east. It was commissioned by the Roman Emperor Constantius II in the fourth century, restored by Byzantine Emperor Justinian I in 6th-century and again renovated during days of 743 and 840. The bridge suffered damage to its foundations as a result of 1998 Adana-Ceyhan earthquake but it has been restored for a second time after months of rehabilitation work.