The Mausoleum of Ataturk - AnitkabirPlaces to Visit in Ankara

The Mausoleum of Ataturk - Anitkabir

This mausoleum for Gazi Mustafa Kemal (Atatürk), the founder of the Turkish Republic, a revolutionary, a brave soldier, and great leader came about as an idea from all Turks that wanted to honor him. For this special project, an international contest was held where Professor Emin Onat won the competition. Anıtkabir is situated on a hill called Rasattepe, behind the Maltepe area of Ankara. It covers 700,000 square metres of land and includes a Peace Park which contains plants from all parts of Turkey and elsewhere. Construction of the Tumulus took nine years to complete. On November 10th, 1953, fifteen years after Mustafa Kemal Atatürk's death, his casket was removed from the Ethnographical Museum with ceremony and laid to rest in what would become their final resting place inside the Anıtkabir. 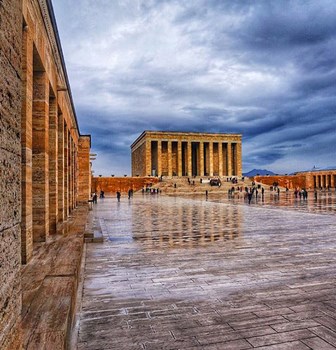 Approaching Anıtkabir from Tandoğan Square, you will see the stairs to your left. If you go up these stairs you will be greeted by two of the ten towers symbolizing the existence and ideals of our nation and state - Independence and Freedom Towers.

The Independence Tower: You can see the relief of a youth with a sword at the entrance. The Seljuk coat of arms represents Turkish strength from an earlier era. It's also representative of the army and protector that helped create our nation; and an eagle symbolizes power and strength for the nation.

The Freedom Tower : On the left is the Freedom Tower. Upon entry, there is a relief depicting a horse. The young female angel has all be holding in her hand what appears to be a Declaration of Freedom. Written on the monument are the words of Atatürk: "All throughout our history, we have been a nation that always symbolizes freedom and independence."

In front of the Turkish Freedom Tower, there is a group statue that depicts three people. The figure holding a book symbolizes the youth of Turkey, while the helmeted person represents their soldier and the third one representing the farmer. There is a second set of statues in the memorial area, across from the first. The two outermost figures are holding wreaths of wheat and lifting an urn to the sky as they pray for God's mercy on Mustafa Kemal Atatürk.The woman in the middle is crying as she covers her face with one hand. These three women together express sorrow over the death of Atatürk.

The Lions' Road: The Lions' Road, lined with 24 statues of lions, leads visitors to the mausoleum area. In the Hittite Empire, once a great empire in Anatolia, lions symbolized power and protection. As well as this, Hittite artwork typically depicts lions in pairs.

The Defence Of the Rights Tower: Immediately at the end of Lion's Road, you will find a large open meeting area to the left of which is the Defence of the Rights Tower. After World War I many societies were formed in various parts of the country with an aim to resist any occupation forces. The Defence of Rights Tower is a tribute to societies that were united under President Ataturk. In relief on the wall, a youth seen about to strike out against a foreign invader with his sword, stands mouthing stop.

The Mehmetçik Tower: Opposite to the Defence of Rights Tower there is the Soldier's tower which portrays the soldier leaving his home and going to war.Encircling these words are quotes by Atatürk about soldiers and women: "The brave Turkish soldier understood the meaning of the battle for Anatolia, and he fought for this ideal." "Nowhere in the world, in no nation, it is possible to mention the efforts of women, above the women of the Anatolian villages." 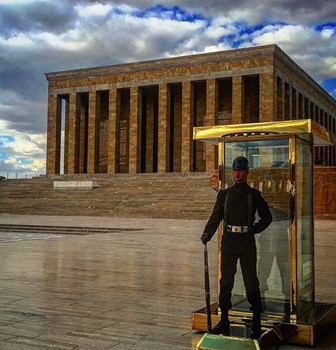 The Victory Tower: The words of Atatürk about historic victories are on the outside wall: "There is no such thing as a line of defence. Only a surface to defend. That surface consists of the entire Fatherland. Not one inch of our country can be abandoned unless drenched with the blood of its people." (1921). The Victory Tower houses the caisson that bore the casket of Atatürk's from Dolmabahçe Palace in İstanbul to Sarayburnu. Aside from the tower, there is a long courtyard in the middle of which lays İsmet İnönü's sarcophagus. This castle was built in honor to him: the second president of the Turkish Republic and Atatürk's army companion. The walls are decorated with frescoes depicting kilim designs.

The Peace Tower: The most prominent feature of the porch facade is a relief on one side depicting village farmers going about their work along with Turkish soldiers patrolling and keeping them safe. The other wall has some quotes from Atatürk: "The citiens of the world should be brought up in such a way as to discourage sentiments of jealousy, avarice and hate." (1935) "Peace at home; peace in the wold." "Waging of war when the life of the nation is not threatened is a murderous crime." (1923). Two cars Atatürk used for ceremonial purposes and state affairs between 1935-1938 also are on display here.

The Flag Staff: This 33m flagpole is made from one piece of metal on which the Turkish flag waves. It was built in America and is the longest single-piece flagpole in Europe. Symbolic relief on the base of the monument are: a torch of civilization, a sword of attack, a helmet of defence, an oak branch of victory and an olive branch signifying peace. Thus, the Turkish flag at Anıtkabir waves over this depiction symbolizing eternal values such as national defence, victory, maintenance of peace and establishment of civilization.

The Victory Reliefs: On each side of the steps leading up to the Mausoleum is a relief portraying different stages in Turkish history. The Sakarya Campaign is depicted on the right. Seen together, these two scenes portray how all members of society depended on one another to rout enemy forces and provide security for all citizens.

The Mausoleum: The Mausoleum is rectangular and has columns on all four sides. On the front of the Mausoleum to the left, Atatürk's speech to Turkish Youth is inscribed. To the right, his speech on occasion of 10th anniversary of Republic is presented.

The Hall of Honor: The most important place in Anıtkabir and the Mausoleum is the Hall of Honor, where Atatürk's tomb is located. All other sections in this hall are among the most honored parts of this mausoleum say why these buildings’ significance complements that of the more prominent location. This hall is completed with the "words to the Army" and İnönü's praise of Atatürk saying, "The Fatherland has indebted you." The marble-clad walls and floor of the hall contrast with the intricately painted, kilim-style ceiling. The tomb of Atatürk sits by a beautiful window at the end of a hall honoring other heroes. It is one piece made from marble without decoration. His final resting place is on the ground floor underneath it, and this space has been filled with soil from all across Turkey to create its own landscape.

The Republic Tower: Once you have left the Hall of Honor, you will see the Republic Tower and the Art Gallery. The art gallery contains oil paintings of Atatürk, stamps and coins with his image, as well as his personal library.