Lymra, one of the most important cities in ancient Lycia, was capital during the period of Pericles for Lycia and had three votes in the Lycian Union. It became an episcopal center in the Byzantine Empire. Limyra Ancient City is located on the Kumluca-Finike road 11 km after Kumluca, in Zengerler village. It occupies the mountain side of the hill to northeast of Finike Plains.

Zemuri, the name of an ancient city in Lycia, is spelled as such in a 5th century BC inscription. This proves that the city has been inhabited at least since that time. The first half of 4th century BC king Perikle's reign saw Limyra used as capital. In order to found the Lycian Union and establish it's Capital, King Pericles chose Limyra. 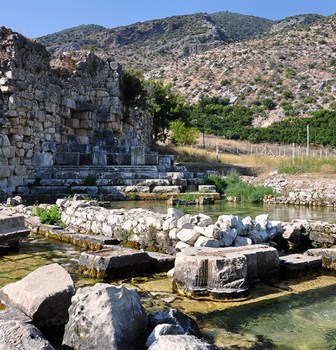 After Alexander the Great defeated the Persians, Limyra came under rule by Helen, Ptalemaios, Lysimakhos and Syria. The 2nd and 3rd centuries were the Limyra golden-age after the Pericles Period. The city, which was a bishopric center during Byzantine rule, became abandoned following the Arab raids in 8th and 9th centuries.

Acropolis: At the Tocak Mount, approximately 300 meters about sea level, there is the acropolis of the city. The acropolis, located to north of ancient city, consists an inner fortress and a lower castle in the north. There is a castle, palace and fortress on a naturally protected hill surrounded by walls. The stairs and pits carved into the rock are likely to be examples of Persian fire altars.

Mausoleum of Pericles (Heroon of Pericles): On the south side of the Acropolis is the Mausoleum of Pericles, decorated with caryatids from around 300 B.C. The Mausoleum ​is located just below on a slope and should not be missed This Heroon is a tomb with temple façades. It overlooks the city and the Mediterranean from an elite location on top of the acropolis. The person buried in this mausoleum wanted to be mentioned as one of the founders of this burgeoning new settlement. The tomb measured 10 meters by 6 meters, and was built on a 19 x 18 meter terrace overlooking it all. The important parts of the Perikle Heroon are on exhibition at the Antalya Museum. .

Ptolemaion Monument: The monument of Ptolemaion is a monument tomb with a roof that looks like the tip of cone and stands out on its base with 15 meters in each side. Built by the Ptolemaic kings, who declared themselves as gods in their former empire in Egypt, this is a monument that was constructed hundreds of years ago. The Kingdom of the Ptolemaic Empire shifted to rule over Lycia after the death Alexander's death. Discussions among the people influenced them to build temples during their reign which are similar in nature and influence with those found in Egypt. The Lymra Ptolemaion monument is the most well-preserved in comparison to those found in Egypt. The main temple structure of a cylindrical design and square plan was where the king's friezes can be found today.

Cenotaph of Gaius Caesar: Cenotaphs are monuments for burying the memory of those who have died, empty burials with no body. Gaius Caesar died in Limyra, but the body was taken to Rome. He was Emperor Augustus's son and he fought in battle where he died on 21 February 4 CE in Limyra. The monument was built to remember him in his honor.