Kurtulus MosquePlaces to Visit in Gaziantep

Kurtuluş Mosque, formerly the St. Mary's Church Cathedral or the "Holy Mother of God Church", is a former Armenian church located in the Tepebaşı district of Gaziantep, Turkey.

Sarkis Balyan, the Ottoman-Armenian architect of Sultan Abdulhamid II, designed the church. Construction started in 1892 by stonemason Sarkis Tashciyan. The Church was part of a complex which also contained school and administrative buildings for the diocese located in Antep city. 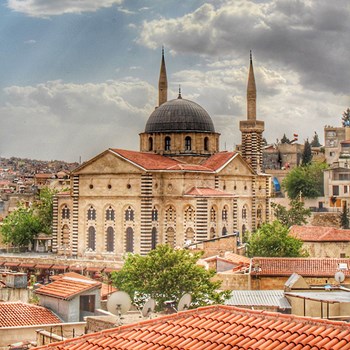 One of the largest mosques in Gaziantep, the mosque's rectangular design divides it into three stages with columns running perpendicular to the mihrab. On the outside, an arch stands above each arm of the cross and on the inside cross vaults cover these areas.

The building is made with stone and on the walls, there are pointed arched windows in the first two rows and round windows in the upmost row. There is an outward protruding Mihrab which is rectangular to give space.

The building has three rows of windows. The largest window occupies the center of the pediment. The church bell was built in Brazil by an Armenian living in London and is now preserved in Gaziantep Museum.

The minaret was added later and has a round body with a square base. The mosque has 5 doors, two of which open to the north, two that open to the south and one that opens to the west.