Kursunlu Mosque and ComplexPlaces to Visit in Eskisehir

The Kurşunlu Mosque and Complex was built between 1517 and 1525 as an Ottoman mosque and has since been used for praying and social events.

The Ottoman vizier commissioned the mosque, and complex between 1517 and 1525. The architect has not been identified though it is believed to have been designed by Acem Ali, who was the head architect before The Architect Sinan. 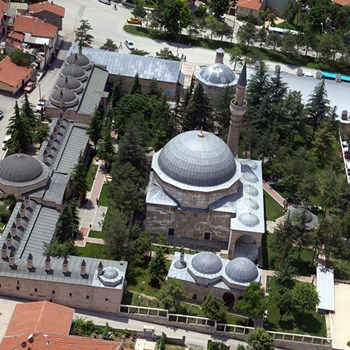 The mosque is named after its lead-covered (Turkish: Kurşunlu) dome. The mosque was a single-dome building with walls made of stone, which had classical architecture inside. These features include marble columns and tiled domes on the exterior of the building. The narthex includes a shadirvan, zawiya, harem (women's section), imaret (food distribution center), mausoleum of Mevlevi Order sheikhs,[1] and two caravanserais.

A building of social complex, having an inscription, is an annex to the mosque. It consists of seven sections. One of the sections has been transformed into a market for arts in Eskişehir and features primarily "meerschaum" (traditional Turkish art handcrafted with carved meerschaum stone) craftsmanship, calligraphy, paper marbling, manuscript illumination embroidery. Art items can be acquired or observed at the market.

The Eskişehir Meerschaum Museum is found near the art market. The museum displays handmade pipes and other examples made of meerschaum; access to the museum is free of charge.