The Karakuş Tumulus, a funerary monument of the Commagene Royal Family in Kahta District of Adıyaman province in Eastern Turkey. The Karakuş Tumulus is an artificial mound like Mount Nemrut, but it's smaller in scale.The monument was erected by Mithridates II of Commagene in 31 BC to serve as the final resting place for his mother Isias, sister Antiochis and niece Aka I. The frequency with which these three females are mentioned on the stele suggests that they were held in high regard within this royal family, reinforcing how important women were seen as being during this era.

The tumulus has been encircled by three groups of limestone Doric columns. The northern group is nearest the row, while two other groups are on the west and east side. Each column reached 9 meters high and had a stela, relief, statue of a bull, lion, and an eagle perched at the top. The foundation was built from six limestone blocks and a Doric capital. The column stood on a square plinth. 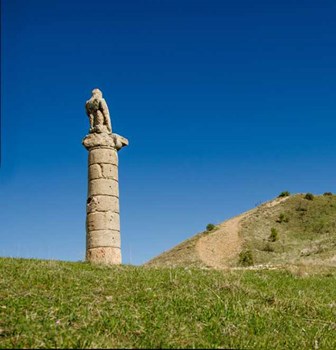 From the south side of the tumulus, only one column has survived. It is comprised of 7 drums and topped with a 2.54 m high statue of an eagle which gave its name to the place (in Turkish, “karakuş” means “black bird”). From the three columns on the north-east side, only two remain upright. One bears traces of a relief, and the other has a bull whose head is missing. The central column is slightly taller than the two on either side and bears an inscription in Greek saying that King Mithridates II erected this hierothesion for his mother Isias, sister Antiochis and her daughter Aka. The inscription, between two lines of damage reads: This is the memorial of Isias, a woman who was recognized by King Mithridates as deserving of praise. With her lies Antiochis, sister to him and daughter of their mother, Antiochis most beautiful among women in whom too lived a short life but an honoured one. Observe that with them is Aka, daughter to Antiochis and granddaughter to the king; an inscription honouring these three becoming figures together for you see they are placed at this place of rest as a reminder to remember each other’s life and honour.

From the last group of sculptures on the northwest side of the mound, only one column is still standing with a dexiosis relief of King Mithradates II and his sister Laodice shaking hands in a farewell gesture. Standing next to them are two more sculptures that represent their cultures; Lade has her head covered by her veil while Mithradates’ hair is shown as he grips his tiara to indicate power over Asia. Nearby, there is a lion head lying on the ground that would have been an additional sculpture in this group. The grave chamber, formerly inside a tumulus and buried under stone blocks, was plundered at some point. Its stones were heavily reused in the construction of Cendere Bridge.