KaleiciPlaces to Visit in Antalya

Kaleiçi is located in the center of Antalya and houses many boutique hotels, historical artifacts, museums, specially designed stores, stylish cafés and restaurants.

Surrounded by walls on all sides with only entrances on the east and west end gates Kaleiçi sections off its different parts into a horseshoe shape. Walls are the common work of the Hellenistic, Roman, Byzantine, Seljuk and Ottoman periods. There are about 3000 houses with tile roofs inside the walls. The architecture of Kaleiçi outside the walls reflects Ottoman architecture.The characteristic structures of the houses in Antalya give a good idea about the architectural history of the region and reflect customs that are specific to this area. 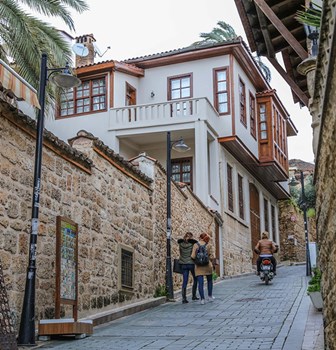 Kaleiçi can be accessed through Hadrian’s Gate. It is one of the best preserved structures in Antalya and was built during 130 CE by Romans who were intent on erecting a structure for Emperor Hadrian.

One of the most important buildings in Kaleiçi is the Yivli Minaret Complex - a Seljuk-era building that can be found between the Zincirkıran Turbah and Nigar Hatun Turbah. The main buildings of this complex are: Yivli Minaret, Yivli Mosque (Yivli Cami), Gıyaseddin Keyhüsrev Madrasah (Gıyaseddin Keyhüsrev Medresesi), Selçuklu Madrasah (Selçuklu Medresesi, Mevlevihane) and Nigar Hatun Turbah. Yivli Minaret is one of the first Islamic buildings in Antalya, and it was built by Seljuks in 13th century.

Just south of the Kaleiçi district is a Historical Marina. Dozens of cruise boats are anchored in the marina. Daily tours can be taken from these boats, which offer views of waterfalls and cliffs on their journey.

Karatay Madrasa is another architectural marvel in the region. The niches in this madrasa and the adornments on its mihrab are truly remarkable.

Karaalioğlu Park should be mentioned as an important destination in Kaleiçi and it sits on 140,000 square meters. Three roads run parallel to the sea on a northern side of the park creating three viewing terraces at the shoreline. Karaalioğlu Park reflects Antalya’s rich plant species with its sparse variety of trees, flowers and birds.

Hıdırlık Tower is located in Karaalioğlu Park within the walls of Kaleiçi. The tower dates to the second century, and while it officially stands at 14 meters tall, there are sections that rise from a square base built for functioning strong defensive purposes into a cylindrical shape suited to its function as an observation platform.