Ishkani Church is located in the high and mountainous Işhan village, overlooking beautiful valley of Çoruh (Chorokhi) River. The village was part of historic Tao region in the medieval Georgian Kingdom.

Ishkani functioned as an important ecclesiastical center until the Ottoman administration of the region in 16th-17th century. Remains of a grand domed church and a small hall chapel survived until recently, when archaeological excavations revealed the remains of several other churches and structures on this site. The Georgian inscription on the entrance to the chapel indicates that King Gurgen I (died 1008) dedicated it to the Holy Mother of God.

The site's main building is the large cross-domed church which measures 36.60 meters in length, width 19 meters at the crossing; western arm 15 meters long and 9 metres wide; height about 35 meters, dome height 11.4 metres, diameter 7.86 metres) . The facade of the building is composed of smoothly cut stones. The tall, cone shaped roof is covered in dark red and green tiles. After the restoration, four arms were covered with stone slabs that are now also covered in the same style of tile. 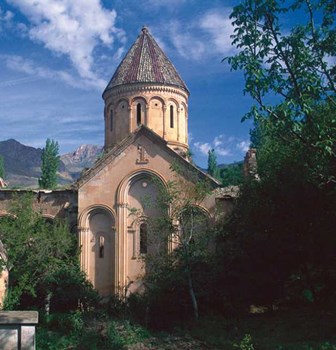 Church has an unusual plan that is the result of several reconstructions. The eastern side of the church comprises a raised apse surrounded by open exedrae. The semicircular wall of the apse is covered with decoration. The vaulted apse features an open exedra and a horseshoe-shaped arcade rests on eight monoliths decorated with cubic capitals. A rectangular ambulatory frames this space. There is a corridor that also has openings on the side that connect to two chambers. The rooms adjoining the apse are both taller and have double arched windows that face inwards into the open center of the church.

The church was covered with frescoes, but they survived mostly in the dome and not so well on the walls of the church. The dome of the Chapel is decorated with Lapis lazurite, and it depicts the Ascension of the Cross. Four figures of angels are floating the cross in the sky. To each side, four times at each axis, is a two-wheeled chariot drawn by four winged horses and driven by a standing figure. Above each chariot there is a Georgian inscription talking about the colors of the horses. Most often accepted scholars believe this repetitive scene depicts the "Vision of Zachariah" (6:1-6) from the Old Testament in which he saw four colored horses and their riders, red, black, white, and gold. Within the drum of eight windows, 8 busts are set on arches. The adjacent blind arcade alternates with these figures and the windows below.

On the south, opposite of the main church stands a chapel with plain facades. The year is mentioned in Armenian letters as 1003 as the construction date of this church. This small chapel has fresco paintings that show a scene of communion in the apse wall and Christ Pantocrator in the conch.

During rehabilitation of the monastery a number of chapels and churches were revealed. There was one large basilica, two hall churches, and numerous monastic buildings.

Discoveries of burials were discovered here, mostly from the medieval period and also at times when there was Russian-Turkish war. Within the time period of the Turkish rule, a mosque was open within this area in its western arm. The church is not accessible to the visitors today.

Ishkhani, with its intriguing architecture, intricate decoration and lavishly painted murals was always considered an amazing monument of Georgian history and culture. It is a monument that deserves recognition as one of the world's important monuments.