Ihlasiye Madrasa was built by the Seljuks in 1216 and repaired in 1589 by Şerefhan 5. Carrying all architectural features seen in classical Seljuk architecture, it is of rectangular plan, flat roof and without dome. 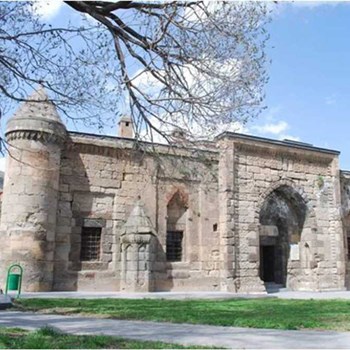 It has an imposing tower in the middle and cylindrical supports at its corners. The ornate portal on the front is the most outstanding part of the building. This magnificent building, which housed important scientists and artists of that time, has three sections apart from its entrance. The restored madrasa today serves as Culture and Tourism Directorate.

The madrasah is a rectangular building with an east-west extension that outweighs its frontal façade. It is not easy to come across another structure where the rough tower image can be eliminated with such skill. The stone work conveys the impression that it is the result of great effort and sensible understanding.

The complicated design of the crown door on the south façade of the madrasah renders it a masterpiece of art. The height and outward projection from the body walls makes this doorway seem monumental, while intricate features provide even more detail.