The Hazeranlar Mansion, constructed in 1865, is one of the few exceptional examples of 19th century civil architecture left in Yalıboyu. The Mansion was built by Hasan Talat Efendi in honor of his sister Hazeran Hanım and has been lived in for a long time, giving it its reputation as a respectable place. 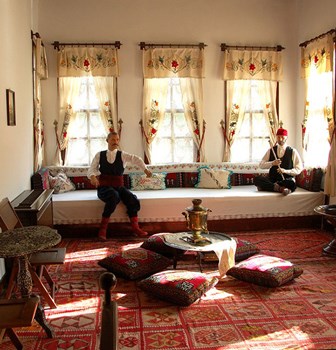 Hazeranlar Mansion in Amasya, with its four iwans and central-sofa, is an elegant example of Ottoman civil architecture. The house has a haremlik (women) section and selamlık (men) section as well as a plan of four iwans and innercourtyard. The first restoration of the mansion was started in 1979 and completed in 1983. The following year, it was exhibited and arranged to serve as the "Museum House."

There are 984 ethnographical artifacts on exhibit in the Hazeranlar Mansion. These include carpets, kilims, kitchenware and women’s jewelries that reflect life during the 19th century. Among these, there are also carpets with inscriptions, as well as bindallıs. (traditional caftan embroidered with metal thread), silver jewelries and glided threads are significantly important in terms of reflecting the period they belong. Today, upper floors of the Mansion serve as a museum-house and the basement as the Art Gallery.