Grand Synagogue of EdirnePlaces to Visit in Edirne

Grand Synagogue of Edirne, aka Adrianople Synagogue is a historic Sephardi synagogue located in Maarif Street of Edirne, Turkey. It was designed in the Moorish Revival style and restored in 2015. 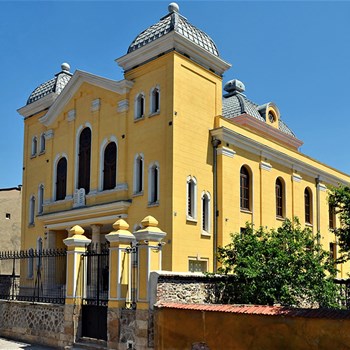 The 1905 Great Fire of Edirne destroyed more than 1,500 houses and damaged several synagogues. Following the permission from the Ottoman Government, edict of Sultan Abdul Hamid II, a new synagogue was constructed on January 6, 1906 at the site of ruined synagogues in Suriçi (Citadel) neighborhood.

Originally designed by the French architect France Depré, who was inspired by Vienna's Leopoldstädter Tempel, can hold up to 1,200 worshipers (900 men and 300 women) it is Europe's third-largest temple and the largest in Turkey. The synagogue was abandoned in 1983 when most of the Jewish community left Turkey for Israel, Europe and North America. In 1995, the Turkish Foundations Institution gained legal control over the synagogue.

Edirne synagogue is reopened on March 26, 2015 after some repairs and renovations. Ishak Ibrahimzadeh, the leader of the Jewish community in Turkey attended an official celebration and morning prayer service that included around 500 members of the Turkish Jews.