El Aman Caravanserai is located on the Tatvan-Bitlis road, a stone’s throw from state road. The work, which covers a very large area, is mentioned as a zawiya in old publications. It was built by Van Beylerbeyi Hüsrev Pasha in the 16th century.

El Aman Caravanserai is located in Bitlis, Amble Plain, it was constructed on the Silk Road by Hüsrev Paşa in the second half of the 16th century, Ottoman architecture. Silk Road is a historical trade route across Eurasia. Silk Road was the major trade route for goods, ideas and people between East and West. Silk Road was one of the most ancient routes used by traders since antiquity. 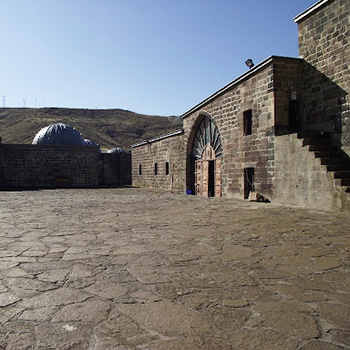 El Aman Caravanserai is a historic inn on the Silk Road, that served travelers with food, water and shelter for centuries. The caravanserai also has a winter room as well as bread ovens and stables where animals were sheltered during cold weather.

Though the construction of this caravanserai is recorded to have occurred in the 16th century, there are no inscriptions detailing when it was built. The area where this structure was built on – Rahva plain at Bitlis-Muş and Van roads meet - could be one of the most dangerous places for caravans during winter because it is located near a winding mountain pass. As such, what started as an alternative shelter for travelers may have grown into a much larger complex and seen its focus shift from protection to practicality.

The caravanserai includes five sections: the courtyard, a mosque, a bathhouse, a pool and 160 rooms. Made of black stone from solid veins, it is big at 90 meters long and 70 meters wide for an intrinsic history that is over 600 years old. The caravanserai has become the largest caravanserai of Anatolia in terms of the area it covers after some additions.