Damlatas CavePlaces to Visit in Antalya

Damlatash Cave, located in the center of Alanya, was discovered almost seventy years ago during quarry operations for stone to be used in harbor construction. The cave is west side of the historical Alanya peninsula. 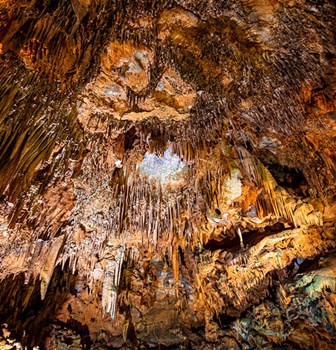 There is a 50-meter passage at the entrance of the cave and after it there is a 15 meter high cylindrical void. From here, the floor of this cave is accessable. The stalactites and stalagmites of the cave that is composed of limestone in a semi-crystalline state were formed over 15 thousand years ago. The cave was named "Damlataş", meaning "Dropping Stone".

Damlataş Cave is famous for its enchanting beauty and as well as the healing quality of the air. Patients with asthma are sometimes admitted to Damlataş Cave in order to recover fully from their illness, where they abide by a treatment plan supervised by a doctor.

The air of the cave in summer and winter is always 22 degrees Celsius, with a consequent humidity of 95% and constant pressure of 760 mm. The air inside the cave contains 71% nitrogen, 20.5% oxygen, 2.5 per ten thousand carbon dioxide and some radioactivity and ions.