Bolvadin is located about 50 kilometers far from Afyonkarahisar city center. The city was founded in very early times. It was part of Phrygia. In the Roman era it was known as Polybotum and a castle was built here. It then passed into the hands of the Seljuk Turks and then the Ottoman Empire, known as a strategic bridge in the mountains.

As the number of works collected through Muharrem Bayar's special interest and effort to educate the students at Bolvadin Lise increased, it became necessary to establish a museum. 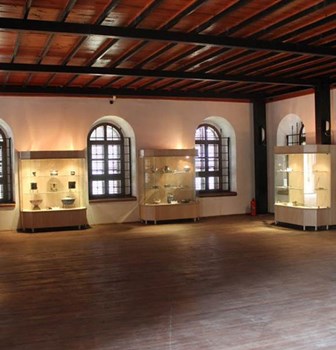 In 1987, the Municipal Cinema was renovated and opened as the Bolvadin Museum. In 2008, while still functioning as the City Museum, it moved to Yanık Barracks and became a museum commemorating all of Bolvadin's history.

The Bolvadin Museum houses over 1000 items, including the works originating from the Old Bronze Age, and Roman, Byzantine, Seljuk, Ottoman and Republican periods. Particularly notable features of the museum are Bolvadin styles of soft cream making, wickerwork and handicraft. The museum has a ground level with exhibits such as Bolvadin-style living room, bridal room, conference hall and exhibition hall; while an upper floor with exhibition hall and library is also available.