Once a flourishing church strong enough to withstand time, The Church of Aydınlar in Atalar Village is located 27 km far from Torul town. Inside the church, Christian frescoes depicting Jesus Christ in the Pantacrator pose can be seen. There are images of Gospels writers and passages on some walls, as well. The church was built in 1850s by the British and the Russians. 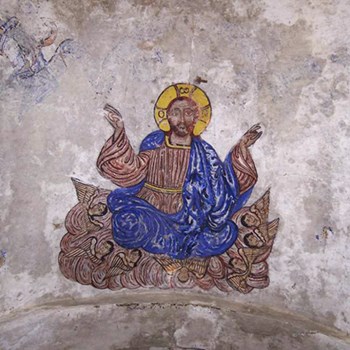 The entrance to the church is through a rectangular opening with a flat lintel and arched pediment. On the eastern façade, the apse and the pastaphorion cells were made protruding and pitched outward from inside to outside in half round shape.

The apse has a intricately designed window with arrow-shaped features, and there are windows and niches on each side of the inner nave. The three main sections inside this building are divided into two separate columns in front of the entrance.

The central section of the cathedral is more substantial than the side sections. It has a vaulted, cradle-type roof and pillars at each end connecting it to its well-defined arches on the sides with arches that are connected by round belts. The interior walls have pale plaster paintings which were whitewashed over in Byzantine times.