Ayazini Village was a settlement place dating back to Phrygian times. The family and single-person rock-cut tomb chambers from the Roman and Byzantine periods, churches from the Byzantine period are carved works in this land which is suitable for such settlements.

There are a variety of well-preserved architectural masterpieces in the city. You can find the standing lion figures from the grave chamber, columns from another grave chamber, and an entire church carved out of rock with exterior and interior architecture work at Avdalaz Castle near town (Avdalaz Kalesi). In addition to these architectural wonders you'll also find beautifully sculpted cisterns throughout the city - just be careful when exploring inside them! 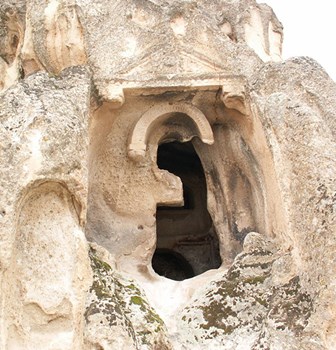 Every year, tourism festivals are held in the Ayazini tourism centre. The village, which is considered Phrygia’s heart, will soon become a major tourist attraction titled “Ayazini Village Tourist Reception Centre.” Ayazini Rock Houses: The area around the entrance of the Ayazini District and on the left side to town were formed from tuff. Initially these early settlements were carved into the rock formation during the Early Byzantine Period.

Some homes have single rooms, while others are carved side by side and next to each other or separately. Some homes can be reached by steps, but most do not tax your muscles with a steep climb. Others are only accessible through tunnel-like passages inside the home. Ayazini Rock Tombs: The rock-cut tombs for family or single-person rock tombs belong to the Roman and Byzantine periods. Some of them are carved as double floors. The fact that the cemetery of Ayazini Town is in the same place, gives the important information that people preferred the same areas for cemeteries.

The grave chambers are accessed by a facade decorated with Medusa head sculpted in relief. Once you pass through the entrance, there is an ante-chamber that contains openings to arched spaces containing cist graves; some of which have lion sculptures adorning them while others are adorned with reliefs depicting couples. Ayazini church (Ayazini kilisesi): This is a stone-carved church built into the side of a steep tuff in Ayazini Town, and can be seen as you enter the town. It has an apse and dome carved out of the rock face as its exterior facade, depicting it as having been constructed around 1000 AD with adjoining chambers also cut from stone.