One of the oldest mosques still standing in Turkey is next to the Ankara citadel. It was built during the reign of Anatolian Seljuks in 1290. 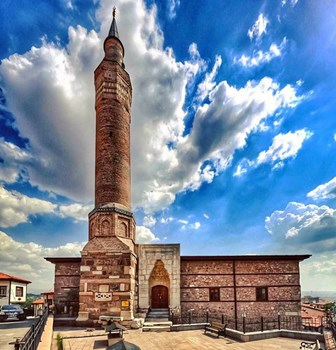 The tomb of Ahi Şerafettin whom the mosque was named is located opposite the mosque itself. The lion statue in the ancient marble wall of his tomb gives this mosque its commonly known name - Aslanhane, which means "the house of the lion".

The square-plan building with 400 square meters has one minaret. Its wooden roof is supported by 24 large wood columns. The mihrab, or the niche in the wall that indicates the direction of Mecca to pray to; is decorated with Seljuk tiles from earlier buildings. The building material primarily consists of spolia from existing structures and there are three gates total with 12 windows within its walls.