Arycanda (Arykanda) is a unique Lycian destination, built on five ascending terraces situated on the mountain slope. The city overlooks a marvelous valley and its view makes it one of the country's most spectacular sites. Arycanda is one of the oldest Lycian sites—its name ends with -anda, indicating its Anatolian origin dating back as far as the second millennium BC. Some of the oldest coins of Lycia (5th c. BC) were also found here during a recent digging; the site is under continuous excavation.

Arycanda survived through Byzantine times, until the 9th century when the settlement moved to a new site south of the modern road. Recent excavations and restoration work has unearthed a beautiful city with the appearance of an architectural model. 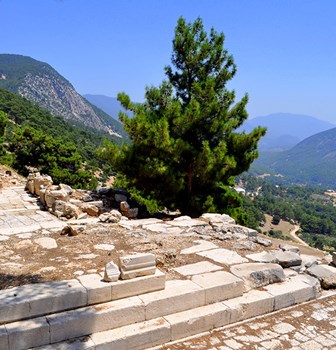 Bath - The largest bath complex in Lycia is still virtually intact. This complex has a sequence of arches next to the gymnasium on the lowest terrace.

The Agora - where some of the shops in its eastern part can still be seen. It was a wide and flat marketplace that faced south; it is located to the south of the Odeon and was enclosed on its southern line by a portico.

Amphitheatre - in excellent condition; built during 2nd centure AD, 20 rows of seats divided into 7 sections. At the edge of every row are holes that were used to support protective awnings. .

Odeon - Built in the 2nd century AD, the main entrance faces south with a triple portal. When it was originally built, this structure once had imposing marble features such as interior walls lined with sculptures and tiles bearing portraits of Emperor Hadrian and masks.

The stadium - from the Hellenistic period, is in the form of a running track and measures 106m x 17m. All that remains are some step-like seats on its north side.

Necropolis - There are two necropolises. The one on the entrance to the site is very interesting with its series of richly decorated funerary monuments while the more eastern necropolis has rock-cut tombs and barrel-valuted tombs.

Bouleuterion - where the Council met, is found on the northwest slope of the city at the end of a long stoa. The building cuts into a mountain slope with rows of seats cut from living rock.