It wasn’t until 1951 that the ancient city of Arsameia was discovered. It only became known after researchers analyzed what they found in the center of the city: a tablet with an inscription.

The founder of Arsameia is named as Arsemes, who was a paternal ancestor of Antiochus I and lived around the first half of the 3rd century. However, the majority of the remains that exist today were constructed by Antiochus I during his rule, who named the city "Hierothesion" (sacred area). Hierothesion means a place set aside for burial. 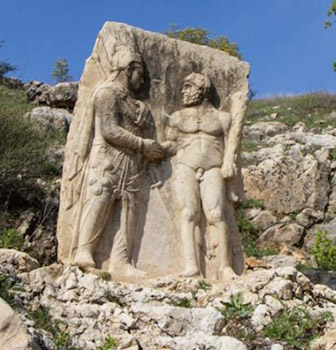 The Arsameia Historical Site is on steep cliffs and the structures here are reached by a pathway used as a ceremonial road. On this path there are relief stelae, rock-carved monuments, the largest inscription in Turkey, the tunnel structure, and remnants of architectural sites at its peak. These sculptures are now known as ktismata in the inscription.

The center of the ruins features an inscription that spans across five columns, with 256 lines total. On the other side is a sacred corridor that can be reached by way of a lengthy stairway. Directly next to the inscription is a stone carving depicting King Antiochus I of Commagene shaking hands with one of the gods, namely Heracles. Scholars believe that the dexiosis (handshake) symbols placed along the Sacred Road were meant to represent a greeting and relief for those traveling the processional path. King Antiochus I is depicted shaking hands with a deity across the mosaic floor. As can be understood from these relief-pictures, King Antiochus believes himself to be on equal ground as God and describes himself as the God King.