Ethnography MuseumPlaces to Visit in Ankara

Founded in 1930, the Ethnography Museum of Ankara is Turkey's first museum. Built to showcase the rich cultural heritage found throughout Anatolia and commemorating its connection with ancient civilizations, it is an architectural gem reflecting periods from Ottoman times all way through the Republic. 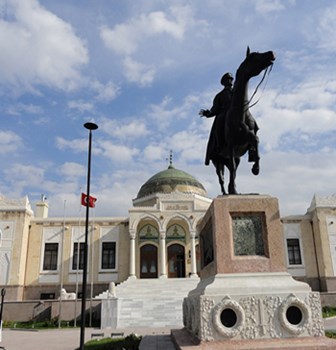 The museum is a rich collection of works which reflects ethinic aspects of the Anatolian people. At the museum, you can see various cultural folk costumes, ornaments, technical materials specific to Turkey as well as fine examples of Ottoman calligraphy at work. The Ethnography Museum in Ankara hosts rugs and kilims from the well-known carpet weaving centers of Uşak, Bergama, Kula, Milas, Ladik, Karaman, Niğde and Kırşehir as well as a library with books on Anatolian ethnology and folklore.

A bronze statue of Mustafa Kemal Atatürk on horseback sculpted by an Italian artist, Pietro Canonica, in 1927 is placed in front of the museum. During the construction of Anıtkabir his final resting place from 1938 to 1953, the sarcophagus was temporarily hosted inside this museum building.