Ankara CastlePlaces to Visit in Ankara

Ankara Castle was originally built as a garrison. Today, it is popular for tourists who wish to explore museums including the Anatolian Civilizations Museum, old Ankara houses, mosques and other historical sights that Ankara offers.

Some people believe that the Hittites, who had a military garrison in Ankara, built the Ankara Castle. There is no actual date of when it was initially constructed though. Despite some key archeological artifacts proving this point, the castle is more often associated with Roman, Byzantine and Seljuk periods of rule during which time the building underwent several renovations. 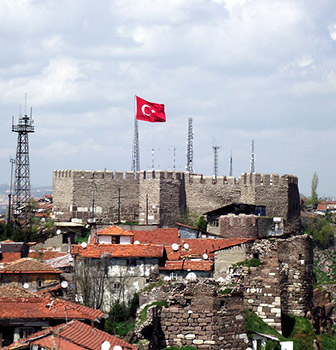 The castle occupies the entire top of the hill, overlooking Ankara both from a distance and from up close where houses are tiled in red. The exterior wall is thick with towers and encircles old Ankara like a protective edge. The fort covers a total of 43 square kilometers with walls that are around 14 meters high, and includes 42 towers. The castle’s highest point, called Akkale or Alitaşı, stands in the southeastern corner. One of the two castle entrances displays writing from Ilkhanate Empire, while the structure’s northwestern section includes Seljuk Empire writings.

The outer wall of the castle had experienced damage over time, but the interior was a survivor and remained intact. During invasions in the 8th and 9th centuries, some ruins from Roman structures in the city were used to renovate the castle. Marble blocks and pillar heads can still be seen on its southern side.

The castle saw severe damage in many invasions, beginning with the Galata invasion (a domain of Ankara) in the 2nd century BC. After the Persians had defeated Emperor Severus Alexander in 222 to 260, the walls of castle were almost entirely destroyed. Since the 7th century, various renovations have taken place to keep the castle operating. The most recent was in 688 when Constantine the Great built a new outer wall to accommodate the city’s new borders. In 1073, the castle was taken over by the Seljuk Empire. In 1832, during Ottoman rule, Maktul Ibrahim Pasha repaired it.

Today, the castle is a combination of different architectural relics from throughout history. The old Ankara houses inside the outer walls are very beautiful. When you watch the sunset over great capital city, it casts a brilliant hue on the juxtaposition between beauty and age represented by the new and old sections of Ankara.