The Museum of Anatolian CivilizationsPlaces to Visit in Ankara

The Museum of Anatolian Civilizations

The Museum of Anatolian Civilizations is located on the south side of Ankara Castle in the Atpazarı area in Ankara, Turkey. The building consists of two pieces: the old Ottoman warehouse and Kurşunlu Han. Atatürk wanted to establish a Hittite museum and Hamit Zübeyir Koşay, then the Culture Minister, bought this building for the museum facilities. After the repairs and remodeling were completed (1938–1968), the Ankara Archaeological Museum was opened to the public. 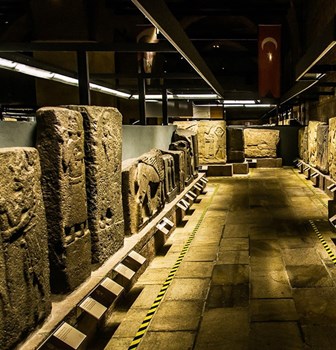 Today, Kurşunlu Han is used to house office spaces such as work rooms, library, conference hall, laboratory and workshop. The Ottoman building of the old bazaar now houses the exhibits. The museum has a number of exhibits on Anatolian archeology within this building. The exhibits cover artifacts from the prehistoric period, Paleolithic era. The exhibit goes chronologically through the Neolithic, Early Bronze Age, Assyrian trading colonies, Hittite, Phrygian empire and Urartian civilization. Greek relics are also on display as well as Hellenistic-era items and Roman, Byzantine, Seljuk and Ottoman items.

The museum's exhibits include examples from all the centuries of human history. We have gold, silver, glass, marble and bronze works dating back to the second half of the first millennium BC and coins starting with the very earliest minted money. The Museum of Anatolian Civilizations, reaching as far back into the history as present with its historical buildings and its deeply rooted past, received the title of "European Museum of the Year" in Switzerland on April 19, 1997.