Amasya CastlePlaces to Visit in Amasya

Amasya Castle or Harşena Castle, is a fortress located in Amasya, northern Turkey. It was attacked, ruined, changed hand and restored many times in the history during the Persian, Roman, Pontic and Byzantine era. Amasya Castle was substantially restored after the conquest of Amasya by the Ottomans and remained in use until he 18th century when it lost its military importance. 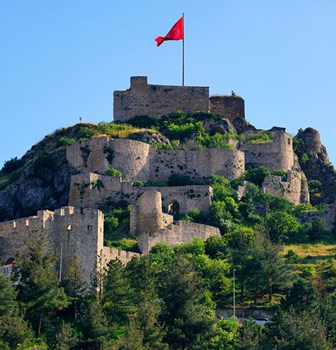 On the southern hillside, there are ruins of the "Kızlar Sarayı" (literally: the Maidens' Palace) used during the Ottoman period. At about 20–25 m (66–82 ft) height, 18 big and small tombs from Pontus kings carved in limestone rock on a plain wall stand. The castle itself has 4 gates with dungeons, cisterns and wells among its features.