Altintepe Ruins are located on a small hill overlooking the Euphrates River in the Üzümlü district of Erzincan Province. Altıntepe is an Urartian fortress, temple and archaeological site from the 9th to 7th century BCE. Altıntepe also served as a strategic fortress during the reigns of Rome and Ottoman Empire.

The site was discovered in 1938 when the region's railway was being constructed and excavated between 1959 and 1968 by Professor Dr. Tahsin Özgüç who found remains from the settlement of Urartians. 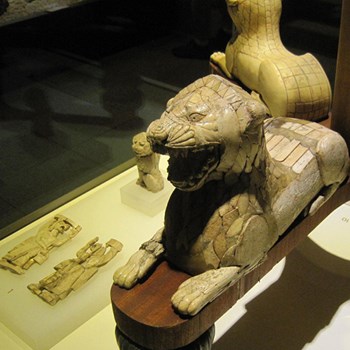 There were a number of findings in the excavated area including a great hall, temple, warehouse, city walls as well as three chamber tombs. It was in 2003 that the excavations were restarted by the decision made by the Council of Ministers.

The Altintepe church is a significant religious site from the era of the Byzantine Empire. Impressively, it has mosaic floors on three naves. The colorful mosaics, decorated with geometric shapes and figures portraying plants and animals, are only found at this site in the region.

Among the goods that were found ancient burial mound dating back to 8th century BC, archeologists have discovered things like ivory and metal objects, decorated helmets and shields, ceramic objects as well as wall tiles. They also found a bronze plaque containing to profiles of kings engraved with cuneiform text on it. The aforementioned discoveries are now showcased at Ankara Anatolian Civilizations Museum (alongside other high-level findings from Urartu). The figures and motives for gods, humans and animals are important among Altıntepe finds.