Alaeddin MosquePlaces to Visit in Eskisehir 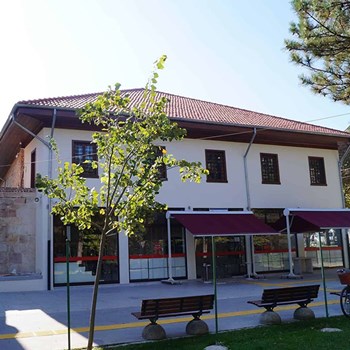 The almost-quadratic rectangular plan mosque is constructed in rubble masonry. An octagonal 6.50m (21.3ft) diameter dome sits at its center, and it has a flat wooden roof. There's an entrance to the Mosque on the north side with a staircase that leads up to the women's section of the church further inside where you'll find ornate verses from -Quran- inscribed around the perimeter of its ceiling.

The mihrab is located in the southern niche of the mosque, and features late Ottoman architectural style. The windows are big, rectangular, and open up to give the space increased brightness. There is a two-story window layout around the north and lateral facades that creates an interesting design at either end of the building.

The building lost all of its original properties after several repairs. In 1945, a major alteration took place when the mosque was closed to worship by executive decree and became an archaeological museum until the establishment of the Eskişehir Eti Archaeology Museum. The latest restoration made in 2014 has since restored some of its original properties to some degree.