Ahaldaba (Yeni Rabat) Church is a medieval Georgian church in the village of Longothevi( today Bulanik), 17 kilometres away from Ardanuc District. The Ahaldaba Church, which is the main church of Ahaldaba Monastery, also known as Longothevi Monastery, was built in the 10th-11th centuries during the reign of Georgian Kingdom.

The church is estimated to have been renovated in 12th century during the reign of Queen Tamar by Queen Tamar's chief vizier, Anton Glonistavisdze. 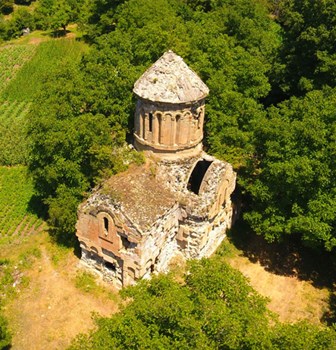 Ahaldaba Church has a free-cross plan. The central part with the dome functions as the main space and there are four cross arms that line up next to it.

The church has two entrances. Arcades are most prominent in the facades of the building. Special attention should be given to the southern façade, which is very well decorated. Near the south side of the Ahaldaba Church is a building that one might have existed, but nothing remains of it today.

Triangular niches that reflect the inner plan outward, characteristic of medieval architecture in the region, were used. It is known that triangular niches were rarely used in the drum of the dome in Tao-Klarceti architecture. Tao-Klarjeti is a Georgian historical and cultural region in north-eastern Turkey and south-western Georgia. The region is based around two river basins - Chorokhi and Kura, but also includes the upper source of the Aras river. The church has more windows than the number of openings: there are stones decorated with relief plant motifs on both sides of the church. There is an inscription in Georgian and Armenian on two separate stones.