Afyon Ulu Mosque, an Seljuk mosque with wooden architecture, is one of the oldest Seljuk mosques that have survived from the period. It is in Çavuşbaş neighborhood and it has a glazed brick minaret. 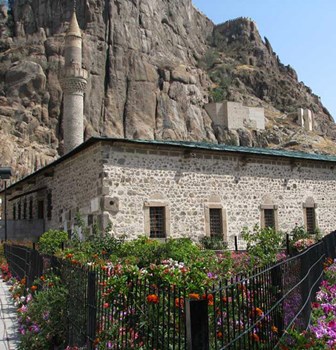 The mosque was built in 1272-1277 by the son of Seljuk Vizier Fahreddin Sahib Ata, Nasuriddin Hasan. Its seats are forty wooden columns with eight rows and header is made of stalactites. The mihrab has three gates on east-, west- and north-. It's a simple Seljuk stone work and it is written with verses from Quran "Ayat el Kursi”.

The intricately-carved wooden pulpit is adorned with geometric tracery. The door of the old, original wooden pulpit bears an inscription attributing its work to Emir Neccar Hacı Bey. Geometric and floral motifs are painted on its beams in rich colors of natural plant dyes.