Archaeology MuseumPlaces to Visit in Afyonkarahisar

As a result of the activities of Asar-ı Atika Muhipleri Cemiyeti (Association for Ancient Monuments) in the first years after the Turkish Republic was founded, Gedik Ahmet Pasha School (Muslim theological school), better known as Taş Madrasa, became a storage area where old works are stored.

The head of the town association Süleyman Gönçer was appointed to a leadership role at the school which became an official warehouse in 1931. Mr. Süleyman enriched this former school with local institutions and the community centre, spearheading its opening as a museum in 1933. The museum was opened in 1933, the 10th year of our Republic, when Süleyman Gönçer became the head. 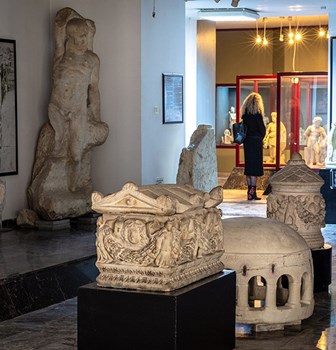 The Afyon Museum, which served as a mixed museum from 1933 to 1970 and is now located within its new building on the premises of the Museum Directorate and Archaeology Museum. Gedik Ahmet Pasha School, which was used as the warehouse of stone works with some ethnographic features from 1971 until 1995, became a museum in 1995 because of its restoration and arrangement by 1978-1994.But the building has been closed since 1996 and the monuments are now part of storage at Directorate headquarters due to difficulties preventing humidity from damaging them.

Preparations will be made again for an exhibition in the future. The Archaeology Museum has a very rich collection on the past. In the museum there are many relics from different historical periods, including statues and coins of former bronze, Hittite, Frig, Lydia, Hellenistic Romans and Byzantines eras.