The Adana Ulu (Grand) Mosque or Ramazanoglu Mosque is a 16th-century mosque in Adana, Turkey. It forms part of a complex that includes a madrasah and mausoleum.

The building of the Ulu Mosque mosque was started by Ramazanoğlu Halil Bey and completed by his son and successor, Piri Mehmet Paşa, in 1541. For 450 years―until it was replaced by the Sabancı Merkez Camii (2002)―the Ulu Cami remained as Adana's largest mosque. It was damaged in an earthquake in 1998. The restoration for this landmark has been completed after 12 years of renovations in 2004. 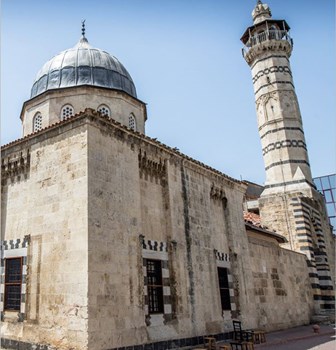 The mosque has Mamluk, Seljuk and Ottoman design elements, the western entrance is older than the main building and is in a different style to that of Ramazanoğlu Halil Bey. The conical stalactite roof that rises step by step above the entrance shows Seljukid features; evidence that Ramadanids, who were a small emirate (beylik) during early 16th century, initially built a small mosque which later served as insufficient once their territory expanded and they built an adjoining larger mosque.

The Ulu Mosque has an open plan with a rectangular floor plan that measures 113 feet long and 107 feet wide. It is entered through large gates on the west and east sides of the courtyard, with the northern section of it covered by a wooden roof supported on pillars for use as an extension to prayer.

The mihrab is decorated with Iznik tiles that also decorate the qibla wall. They were added after 1552. The minaret near the eastern entrance has a covered balcony and is influenced by Mamluk architecture. The exterior of the minaret is made with stone of two different colors that can be seen from afar.

The madrasah is on the east, west and south side of a nearly square courtyard. The north side has the main classroom which is covered with two domes. The outer length from east to west is 32.8 metres (108 ft). There is a simple and clear stonework in the madrasah. The fountain had 8-columns that support a pyramidal roof. There is also an unrelated building placed beside it, so it does not provide a well planned and monumental view.

The portal niche of the madrasah has a beveled molding decorating the pillars and keystone on both sides. The surrounding of the inscription is decorated with patterns that form from intersecting threads similar to palmets (fan shaped glyphs) and badges. The second rectangular window on both east and west walls is framed with geometrically patterned molding including checkers, six-armed stars, and flowers at their centers.

The mausoleum of the Ramadanids has a tall dome. Halil Bey and the sons of Piri Paşa that are buried there have sarcophagi, each with tiles on them.