Adana Museum, also known as the Adana Archaeology Museum, is a museum in Adana that houses the archaeological heritage of Cilicia. It is one of the oldest museums in Turkey.

Adana Museum was founded during the French rule of Cilicia in 1919. The museum initially ran on a diverse collection of objects that were found by local civilians and military personnel, as well as items from Silifke. 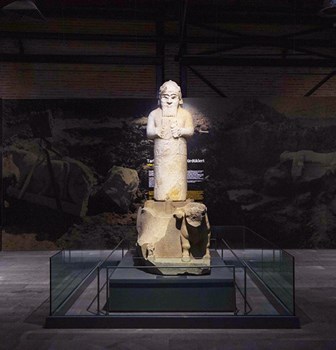 Alyanakzade Halil Kamil Bey from Adana was appointed as museum director after the formation of the republic in 1923, and with his successful work, all accumulated material was moved to the madrasah section of Cafer Pasha Mosque in 1928.

The museum includes artifacts from various periods including Neolithic, Bronze Age, and Archaic. There are many Roman exhibits to see such as sarcophagi with rich garland decorations, jugs, catapult shots, inscriptions, altars and other architectural elements.

Finds from specific excavations in the region are housed separately. A marble sarcophagus depicting the Trojan wars in high relief is from Tarsus and is known as the Akhilleus sarcophagus.

There is also a sarcophagus with a medusa from the antique city of Augusta which was submerged because of the Seyhan Dam Reservoir, and a human size bronze Karataş Statue from the Magarsus ancient city in Karataş, all of which are well known artifacts from the old museum. The museum also houses the only known inscription mentioning Apollonius of Tyana from 3–4th century AD.