The Great Clock TowerPlaces to Visit in Adana

One of the most striking features in Adana is The Great Clock Tower. Standing at 32 meters in height, this modern clock tower has towered over the city since 1882. Not only does it provide a close view of one of the good examples of Ottoman late period architecture but also symbolises Ottoman modernization during 19th century. During this time many European or Ottoman companies moved their businesses to this bustling town for booming cotton trade.

The Great Clock Tower was started in 1879 by the Turkish mayor Kirkor Bezdikyan. An Armenian architect, Kasbar Agha Bzdikian, also contributed to its design. The clock tower was completed and finished in 1882 by Mayor Mangoyan as a symbol of modernization. Other mayors such as Hacı Yunus also made significant contributions to its construction over time before it became one of Adana's most famous landmarks. 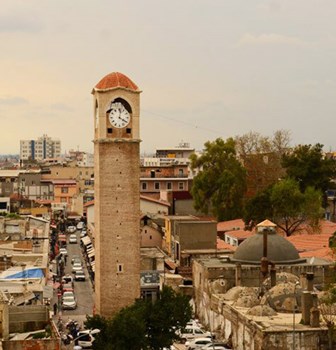 The Great Clock Tower was constructed as a square prism, the walls of which were built with bricks. The tower has a height of 32 m (105 ft), but it is believed that construction extends even further below ground level at 35 m (115 ft). There are rumors that the water springing from these foundations had healing properties.

The construction of the tower coincided with that of other clock towers in other major cities within the Ottoman Empire, and The Great Clock Tower was the tallest. Istanbul’s Dolmabahçe Clock Tower remains the second highest.